Water is life but having access to it can be deadly.

The death of four children in Wolordé (Far North region of Cameroon) following the collapse of a well is a nightmarish scenario in which the Cameroonian Government will again be a subject of much criticism.

According to an article published on April 5, 2019 by the news organ Quotidien Mutations  “four children of the same father succumbed to the collapse of a traditional well beside which their mother was doing laundry …” The problems of access to water are facts that have persisted for decades in several localities in the northern regions of Cameroon. “Hand-dug wells that crumble on individuals, toxic gas emanations that cause deaths here and there, jostling and the eternal wait at water points …” remains the difficult daily life of women and children of these regions.

The Cameroonian Minister of Water and Energy in a press release of April 4, 2019, informed “the people of local theater of this regrettable situation that the Government under the Triennial Emergency Plan has planned to carry out 3000 boreholes for the benefit of the northern regions “. He goes on to say that the Government has planned for the year 2019, an envelope of four (04) billion CFA francs for the construction of 450 boreholes in these same regions. 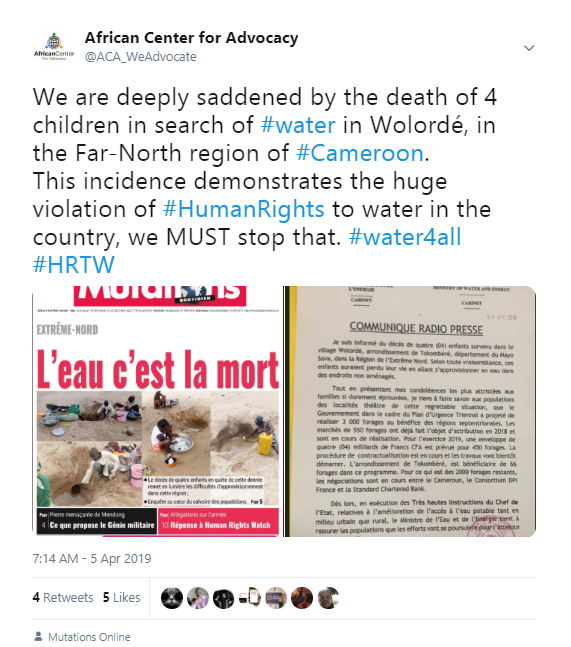 Is this the solution to the problem?

The sustainable management of water resources still remains a major challenge in Cameroon. For example, according to the news organ Quotidien Mutations, 67 standpipes were built between Mora and Kolofata (in the Far North region of Cameroon) in 2005 but today, more than half of these are non-functional. This is not an isolated example. It is obvious that the Government’s reaction will not solve the problem definitively.

AVAILABILITY: The human right to water entitles everyone to sufficient and continuous water for personal and domestic uses. Likewise, a sufficient number of sanitation facilities has to be available.

QUALITY: Water has to be safe for consumption and other personal uses, so that it presents no threat to human health. Sanitation facilities must be hygienically and technically safe to use. To ensure hygiene, access to water for cleansing and hand washing at critical times is essential.

ACCEPTABILITY: Sanitation facilities, in particular, have to be culturally acceptable. This will often require gender-specific facilities, constructed in a way that ensures privacy and dignity.

ACCESSIBILITY: Water and sanitation services must be accessible to everyone within, or in the immediate vicinity, of household, health and educational institution, public institutions and places and workplace. Physical security must not be threatened when accessing facilities.

AFFORDABILITY: The price of sanitation and water services must be affordable for all without compromising the ability to pay for other essential necessities guaranteed by human rights such as food, housing and health care.