GENEVA, SWITZERLAND — The 182 Parties to the global tobacco treaty made critical progress this week in funding global tobacco control and rooting-out industry interference in health policy. But significant work remains as the “other” seminal COP this week winds down, especially given the role of the tobacco industry in intensifying the ongoing COVID-19 pandemic.

The crowning achievement of this week’s World Health Organization Framework Convention on Tobacco Control (WHO FCTC) talks was the approval of a $50 million investment fund. The fund will provide more sustainable resources to the WHO FCTC’s Secretariat to support Parties in implementing the landmark treaty.

But significantly more is needed for the treaty to achieve its life-saving potential (200 million lives by 2050). There is an estimated $27.4 billion funding gap for global tobacco control. A scant .16% of global health aid is going to tobacco control programs despite the staggering $1.4 trillion year tobacco products are costing the global economy. What’s more, global spending on tobacco control is dwarfed by the industry’s combined marketing, political, and “scientific” expenditures.

“It’s incumbent on countries to not lose another moment, another life, waiting to enact the treaty’s directive to hold Big Tobacco liable for its harms,” says Bobby Ramakant, an India representative of the Network for the Accountability of Tobacco Transnationals. “The industry has made its money on our backs. It’s time they pay it back.” 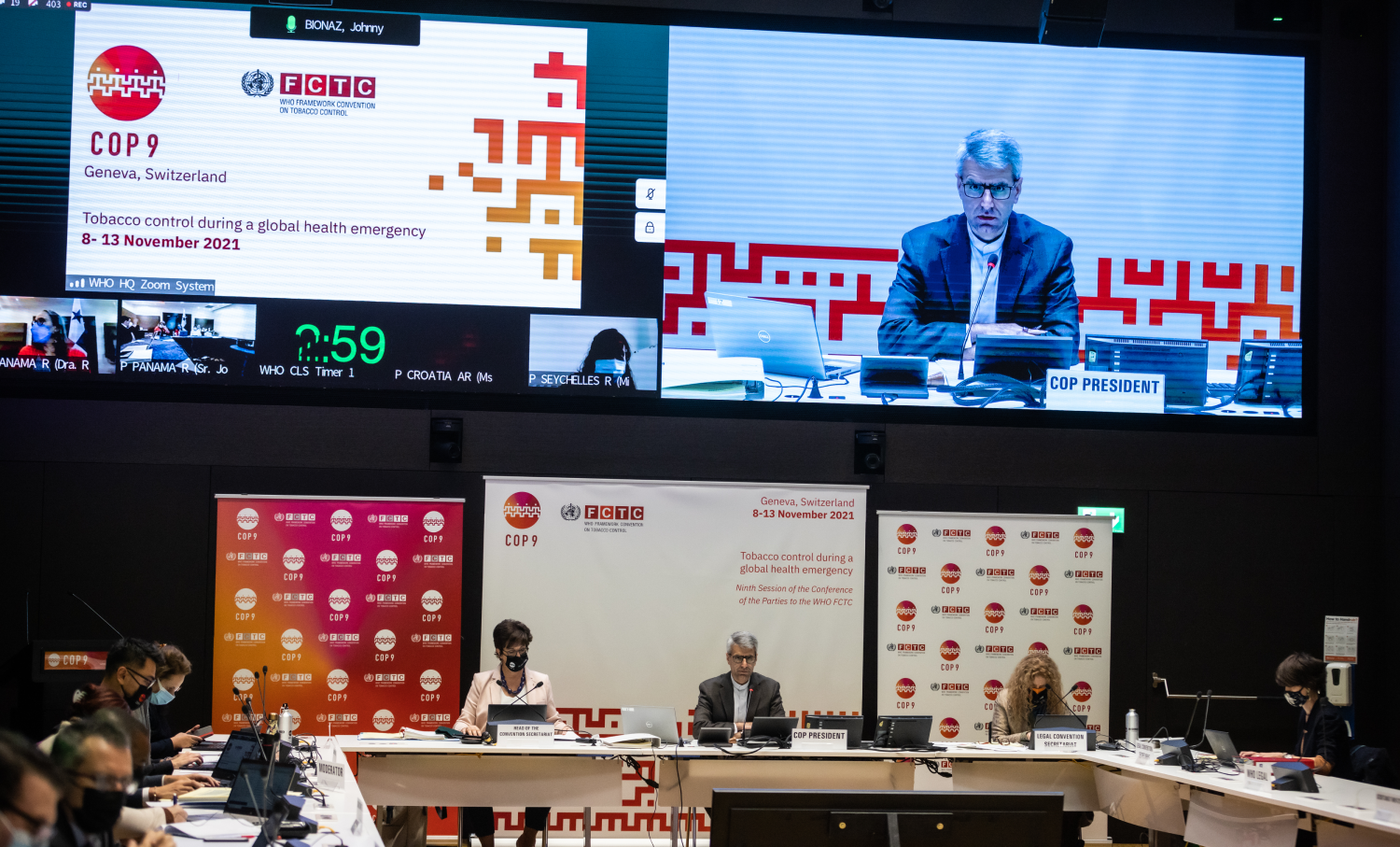 Credits: Secretariat of the WHO FCTC

Article 19 of the WHO FCTC and tools developed thereabouts provide a roadmap for how countries can adopt policies and pursue legal channels for holding Big Tobacco financially liable. Repeatedly during the COP, delegates and civil society applauded the new investment fund and urged countries to hasten progress on liability. Parties such as Brazil, have already made strides on this front by suing large tobacco corporations to recover health costs.

The speed of Article 19’s implementation has, of course, been hampered by the tobacco industry and its proxies. There are, however, signs that the industry’s interference in the treaty is on the ebb as Parties institute new policies on conflicts of interest.

The first-ever Global Tobacco Industry Interference Index 2021 noted progress across three continents in safeguarding national policies from Big Tobacco’s manipulation. The Index’s Latin America pullout noted that three countries improved over the last year in rooting out interference. But perhaps most notably, the vast majority of countries in the Americas registered to COP9 (23 out of 28 Parties) submitted disclosures about potential conflicts of interest to the treaty body.

“The FCTC is not the only treaty, whose success depends on keeping the fox from guarding the henhouse,” says Daniel Dorado, tobacco campaign director for Corporate Accountability. “But it is the only treaty that has clear guardrails against industry interference and that is actively working to implement and improve them.”

Dorado emphasizes that there is a need for constant vigilance of the industry and its proxies, pointing to how a cadre of countries with historic ties to Big Tobacco attempted to derail this week’s talks.

This was perhaps most visible in the efforts of countries like Guatemala to table a collective condemnation of the tobacco industry’s role in exacerbating the COVID-19 pandemic. Guatemala and others, in fact, pushed successfully to remove language noting the scientific consensus that tobacco use significantly increases the risk of severe illness or death from COVID. These countries were also successful in deleting language urging countries to “prevent tobacco industry interference related to COVID-19 public health policies and actions through trade.”

The actions of these countries were more galling given the Index’s key finding that the COVID19 pandemic was used to intensify tobacco industry interference across geographies over the last two years.

And the same ministers responsible for watering down the treaty body’s stance on tobacco and COVID, also raised objections to declaring their conflicts. In the case of the Philippines, its Ministry of Health went so far as to issue a statement distancing itself from the remarks of its delegation at the COP; remarks that promoted tobacco products and urged the inclusion of Big Tobacco in the talks.

“Whether Zimbabwe in the Africa region or Honduras in Latin America, the tobacco industry has its proxies in these talks. But by strengthening conflict disclosure requirements, making these disclosures public, and adopting strong national protections against conflicts, this treaty can make important strides,” says Blanca Llorente of Fundacción Anaás-Colombia. “When we clear industry interference out of the way, we clear the way for all of the treaty’s invaluable protections to take hold.”

For more on COP9 outcomes, join the FCTC closing presser and find their media briefs here. For civil society perspectives from throughout the COP, read the daily bulletins from the Framework Convention Alliance. And for a record of industry interference in and around the talks, visit Tobacco Tactics.