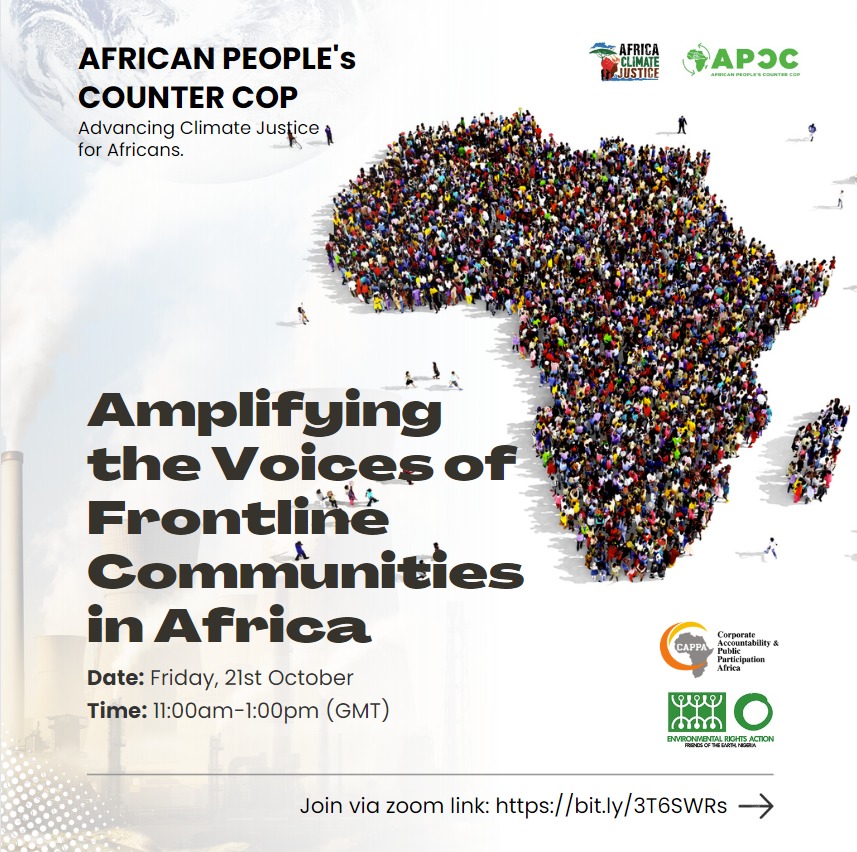 On the sidelines of the African Peoples Counter COP which began on October 17, the Corporate Accountability and Public Participation (CAPPA) will be launching a four-country report titled Impact of Climate Change on Frontline Communities in Africa: Case study of Nigeria, Cameroon, Togo, and South Africa.

The report will be unveiled at a session of the Counter COP titled Amplifying the Voices of Frontline Communities in Africa on Friday, October 21, 2022, from 11 am-1 pm GMT.

Impacts of Climate Change in Frontline Communities in Africa documents the challenges faced by communities in Nigeria, Cameroon, Togo, and South Africa and captures their vulnerability to climate change. It captures the testimonials of local community people, especially women who bear the burdens of climate change but are not part of or considered relevant in the decision-making processes to address the crisis.

The report details climate impacts on the Okun Alfa community, once a leisure resort in Lagos, Nigeria which is now at the mercy of the Atlantic’s raging waters. The plight of the Okun Alfa community is exacerbated by the Eko Atlantic City real estate project promoted by the state and the $19 billion Dangote Refinery owned by Aliko Dangote, Africa’s richest man.

In northern Cameroon, the Kakou and Ouro Garga communities struggle with climate change-induced drought which has led to a decrease in agricultural yields and disruption of the agricultural calendars that existed for generations. In the two communities, the cost of food has skyrocketed, forcing families to contend with poverty and malnutrition.

In Togo, the Doevi Kope community, which had rich vegetation cover forests in the 1970S is now seriously threatened by coastal erosion and coastal flooding. The impacts are worsened by the activities of Bolloré Africa Logistics, the company that is currently constructing the Port of Lomé.

Eldorado and Katlehong communities in South Africa contend with incessant exposure to drought and heat waves that is now adversely affecting farming and leaving young people unemployed, desperate, and vulnerable.  The report also recommends holding Big Polluters accountable for the climate crisis as well as concrete recommendations to government, civil society, and other critical interventionist agencies.

To participate in the launch of the report on the Impacts of Climate Change in Frontline Communities in Africa, register here: