Developing countries across the world especially Cameroon are demanding that compensation for damage caused by global warming be high on the agenda of the UN World Climate Conference COP27.

The disruption of the seasons in Cameroon is part of the climatic conditions that destroy the livelihoods of local communities in the northern region of Cameroon. Afrik 21 quoted a farmer saying « The rains do not fall enough to allow the seeds to germinate and flourish. The seeds are destroyed, and we have to buy new ones. And yet most people do not have enough money to buy seeds twice in one season. This year the rains did not start in the usual season, causing many of us to lose hope in farming, our main activity,” says Zalai Philipe, 37, a farmer from the village of Ouro Garga.

The report published on August 5th 2022 in Yaounde by the African Center for Advocacy, also notes the health impact of climate change on communities in the northern region of Cameroon. “Variations in rainfall, sometimes excessive or infrequent, because flooding, which in turn leads to diseases such as cholera, typhoid, malaria, and diseases related to child nutrition,” the report says.

« COP26 failed to recognize the urgency of the climate crisis. As we head towards COP27 in Sharp El Sheikh, Egypt, new mechanisms need to be put in place to make financing for loss and damage accessible to communities on the frontline of the climate crisis, such as those in Kakou and Ouro Garga,” says Younoussa Abbosouka, ACA’s programme officer.

Two senior government officials from Senegal and the Democratic Republic of Congo (DRC) participating in the conference jointly refused to allow their countries to give up future oil and gas exploitation under pressure from industrialised countries in the name of the fight against global warming.

Africa news reported that Ministers and experts from the Least Developed Countries Group, about 45 mainly African and Asian countries, met this week in the Senegalese capital to adopt a common position for COP27. Another meeting of African ministers is scheduled for Thursday, which US climate envoy John Kerry is attending. 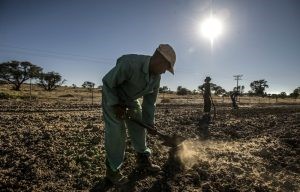 The Senegalese minister and his Congolese counterpart Eve Bazaiba Masudi denied the legitimacy of industrialised countries demanding that their countries give up hydrocarbon exploitation.

Senegal plans to start exploiting its oil and gas reserves in the Atlantic in 2023. The DRC government launched tenders for 27 oil and three gas blocks at the end of July, sparking concern among environmentalists about the impact on biodiversity and climate of developing peatland and forest areas.

Some 20 countries, including the United States and France, pledged at COP26 in 2021 to end foreign financing of fossil fuel projects without carbon capture technologies by the end of 2022.
The Congolese leader said it was « inconceivable” that the West, which “has built its industry on fossil fuels”, would ask the DRC to give them up while it continues to account for the overwhelming majority of emissions.