Donate
COP 26: Africa is Not a Dumping Site for Carbon Emissions – African Center for Advocacy (ACA)

The Climate Justice Civil Society Organizations in Africa has issued a joint position paper to governments of Africa attending the 26th conference of the parties to the United Nations Framework Convention on Climate Change in Glasgow, urging them to advance real solutions through proper climate change policies and actions.

The position of the civil society organizations was relayed Friday, November 5, 2021, in Yaounde by officials of the Africa Center for Advocacy (ACA).

“African leaders should promote solutions that will build resilience of African communities with a view to demonstrate commitment for the continent’s fair share of global climate change action.” Younoussa Abbosouka, Advocacy Officer at ACA told journalists during a press briefing in Yoaunde.

The press briefing was organized to throw more light on the joint position statement from the African Climate Justice Civil Society, with emphasis on the recommendations to the African governments. 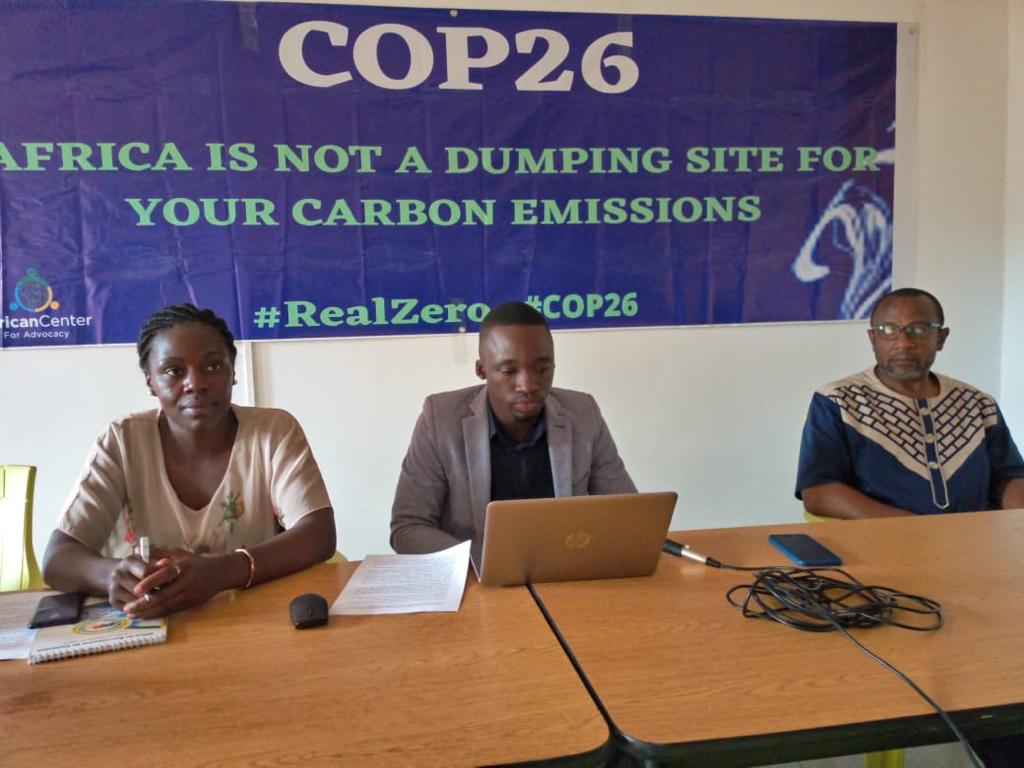 Younoussa Abbosouka (Middle), Advocacy Officer at ACA at the press briefing in Yaounde

The civil society groups have urged governments across the region to come up with real climate change plans (adaptation and mitigation) and reflect the same in their Nationally Determined Contributions (NDCs), and ensure that the NDCs are independent of false solutions and corporations’ influences, but rather accommodates workable and home-grown climate solutions on mitigation and adaptations.

“Not everyone is responsible for the climate problems humanity faces today, one particular sector is the Big Polluters. It is one that proposes false solutions called ‘Net Zero’, they promote these solutions to dictate to the rest of the world how to live, but they act mostly for themselves and in order to continue polluting.” Younoussa Abbosouka.

Another key recommendation in the joint position statement is a call for African leaders attending the Glasgow Cop26 summit to challenge and reject pledges made by polluting corporations and governments to achieve ‘Net Zero’ emissions. This to them is a ploy to shift additional burdens unto the African region and avoid responsibility for their role in the global share of emissions to date.

“The polluting rich countries and corporations are fully on ground in Glasgow to promote their ‘Net Zero Scam’ which will only bolster corporate power and further delay the urgent actions needed to address the climate crisis … It will only be strategic for governments of the continent to project a harmonized position and engage the discussions with a ‘common language’ premised on uniform climate actions that won’t compromise each nation’s peculiarities.” Nnimmo Bassey, Director of Health of Mother Earth Foundation said.

It is common knowledge that Africa is the hardest hit by climate change, in spite of its evident in significant contributions to this global problem.

Worth nothing is the fact that the African Center for Advocacy (ACA) is dedicated to empowering citizens and the civil society to apply a well-understood set of skills, techniques and tactics to influence political decisions on issues that are of concern to society.