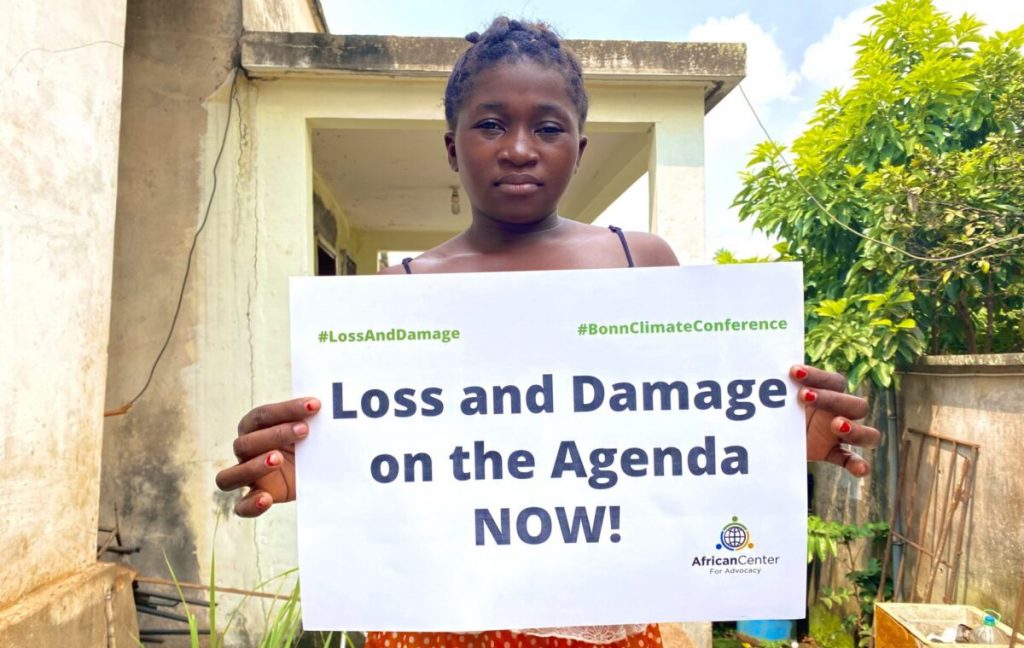 African Climate Justice Groups have urged governments across the continent to demand justice and fair play in combat against climate change.

The clarion call is the crux of a statement issued Tuesday as talks advance at the 56th session of the subsidiary bodies meeting in Bonn, Germany.

The statement was handed to newsmen Tuesday in Yaounde during a press briefing organised by Younoussa Abbosouka, Program Officer of the African Center for Advocacy, one of the groups of the network. The groups have equally challenged governments to demand loss and damage finance as well as adopt effective and workable non-market mechanisms needed to attain real zero and not net-zero.

In the statement, the groups said “It is no secret that Africa’s contribution is insignificant to the current climate crisis, yet the continent is the most adversely affected by its consequences. To date, Global North countries have failed to deliver their climate finance obligations and do their fair share of climate action. This has forced African governments to tap into their meagre consolidated funds to mitigate the climate crisis within their countries, a situation that has further increased the region’s debt profile”.

“We hereby call upon African governments attending this SB56 to set a stable foundation for an efficient Loss & Damage finance facility to be established at COP27 and advance strong arguments to commit industrialized and wealthy countries to provide adequate L&D finance” the groups urged.

African governments, they insisted must also be at the forefront of developing a way forward for formalizing collaboration on non-market approaches to meet Paris commitments as part of Article 6.8.

The said plan, they immediately said should include technology transfer, finance, and other methods of collaboration to scale-up renewables, agroecology, keeping fossil fuels in the ground, and other proven means of preventing and reducing emissions.

“We’re expecting the highest-polluting countries and corporations alike to continue rolling out the greenwashing carpet while they parade a variety of meaningless ‘net zero’ plans and pathways, that require little to no action and do not reduce emissions at the source” they continued.

The groups also insisted that “Africa must challenge and reject pledges made by polluting corporations and governments to achieve ‘Net Zero’ emissions, which are being used to shift additional burdens onto the African region and avoid responsibility for their role in the global share of emissions to date. Instead, our governments must commit to achieving Real Zero emissions reductions, embracing the concept of equity”.

“The latest IPCC report is a strong indictment of the global north and a caution against ineptitude from governments of the Global South. As the world gathers in Bonn to review climate change commitments, it is only fair to accommodate the concerns of frontline communities and close corporate influence in our climate discourse” said Akinbode Oluwafemi, Executive Director of Corporate Accountability and Public Participation Africa.

For his part, the Regional Director, Corporate Accountability Climate Campaign, Hellen Neima noted that “Africa being the host of the upcoming 27th Conference of the Parties, must take this opportunity to shape what remains of the climate talk by unanimously demanding what is owed to her- Loss & Damage finance, a global goal on adaptation, and a workable non-market mechanism for real solutions. The groundwork for these must be laid now in the ongoing 56th UNFCCC intersessional”.

“Climate change presents systemic risks to our economies, public health, agri- culture and livelihoods, which collectively threaten to undo Africa’s development gains. The effectiveness of loss and damage financing at COP 27, in Egypt, will be, for Africa, synonymous with climate justice for a continent that pollutes the least, but which bears the brunt of its effects” mentioned the Program Officer, African Center for Advocacy, Younoussa Abbosouka.