Donate
Veolia and Suez: Barriers for access to water for all in Africa.

Veolia and Suez:  Barriers for access to water for all in Africa.

In a statement published on Monday June 17, 2019, the Senegalese Water (SDE) has announced that it will seize the Supreme Court of Senegal, after the rejection of its actions before the Public Procurement Regulatory Authority (ARMP)to challenge the allocation to the French group, Suez, of the water supply market.

“Determined to enforce the rules of transparency in the interest of consumers and populations, the Senegalese Water announces the seizure of the Supreme Court of Senegal and will explore the possibility of engaging other international institutions” said the statement.

In fact, in October 22, 2018, Suez won a temporary contract to supply water for 15 years in urban and peri-urban areas in Senegal at the expense of the SDE (whose majority shareholder is the Franco-African group Eranove, alongside Senegalese shareholders with 42.2%) and Veolia.

“The lower the price of water is, the more people have access to the resource, there is a reduction in waterborne diseases, there is an increase in the schooling rate, especially among girls” -Younoussa Abbosouka

Senegal should learn from the Gabonese case, where the Gabonese State has terminated the concession agreement that binds it to SEEG, the Gabonese Energy and Water Company. 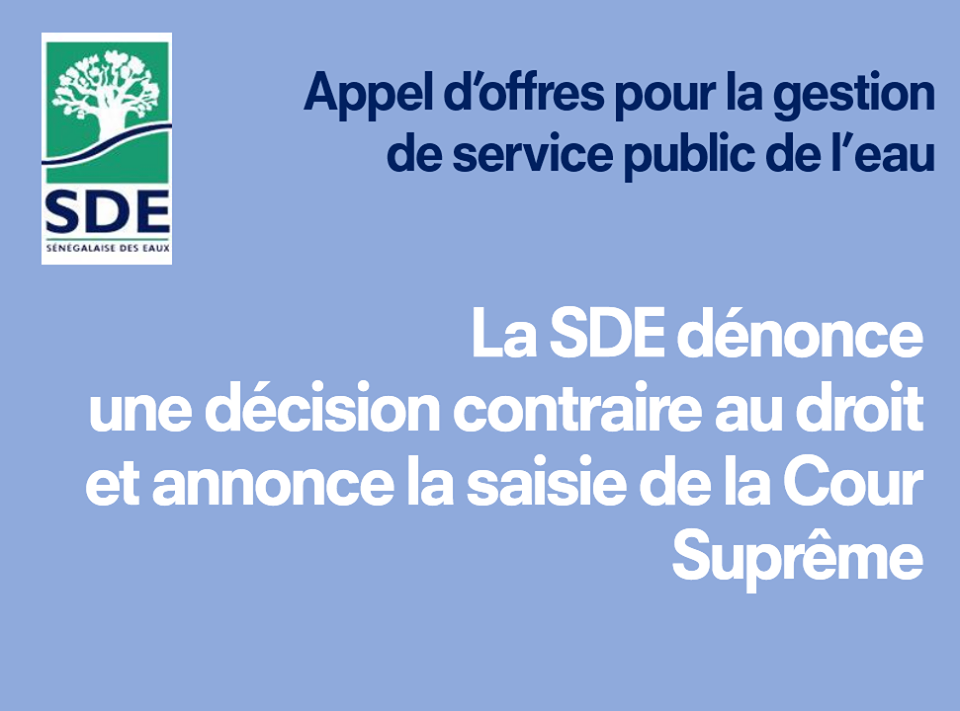 The decision of the Gabonese government was taken following the degradation of the quality of the service rendered to the users, recurrent water shortages, colossal invoices in spite of the absence of water, the financial efforts by the State which has not produced the expected effects and the recurrent complaints of the populations. In other words, there was a violation of the human right to water.

Veolia, therefore, had decided to seize international jurisdictions and claimed 65 billion francs CFA (100 million euros) of unpaid government debt to SEEG. Moreover, the group reached out to a US law firm called Mayer Brown to sue Gabon in court, before an agreement was reached in Paris, through a transaction protocol that provides for the transfer of 51% of SEEG shares held by Veolia Africa to the state owned corporation.

“Veolia will never return to Gabon” this sentence of the former Gabonese Minister of Water and Energy, Patrick Eyogo should seriously draw the attention of African leaders on the negative impacts of water privatization, or the public private partnerships in the management of the water sector.

The Senegalese state therefore makes an error of appreciation and should instead focus on improving the service delivery of the structure, improving customer services.